A well-made portable fish finder has a lot to do with a successful fishing trip.

Whatever the conditions, a portable fish finder can help reveal precisely where the fish are hiding.

Consequently, you will know exactly where you should cast your line.

There is a lot to consider in choosing one. You would have to determine what kind of marine environment you would be using it in.

You would also have to consider its suitability to that environment, of how well it can direct you to your targeted catch.

There are many products that claim to be perfect for the job. Inevitably, however, some will fall short of the gold standard and few products will remain as the best fish finders you can buy.

The reviews we have listed here are not likely to disappoint.

They have been picked on a simple price-relative-to-performance basis.

They are also some of the best fishing devices currently available on the market.

What Are The Best Portable Fish Finders

Here they are featured in the table below.

How To Choose The Best Portable Fish Finder

Being quite an essential tool of fishing these days, it is crucial for anglers to choose correctly with fish finders.

There is a lot of variety in the market and selecting one is not that easy. There are numerous features and applications to consider.

Happily, however, there are some fundamental criteria that should whittle them down considerably and make life easier.

There are versions that feature GPS tracking. These are ideal for anglers fishing out at sea and would need some direction with getting back to shore. They can remember prime fishing spots that have been visited before. They also have sonar which can paint a clearer picture of everything under water.

Then there is the standalone version. It also has sonar but no GPS tracking. Sometimes, however, these services may be offered for an additional fee. It is the best fish finding device for kayak fishing. This is mainly thanks to its sonar, able to deliver accurate readings of depth and temperature.

Finally, there are the fish finders with networking features. They are certainly not cheap. However, they will allow you to locate different hotspots or share pictures online.

The transducer is the part of the device that produces sound waves that generate images.

The key feature to look for with the transducer is the cone angle which is to say the beam width.

The more width there is, the more area that will be made visible to you. The angles of cones are commonly between 16 and 20 degrees but can vary from 9 to 60 degrees.

Other features to consider with the transducer are its frequency capacity and the kind of beam it emits.

Low frequencies are suited for deep water while higher frequencies are good for the shallows. For anglers who fish once every so often a single beam in their transducer is sufficient.

Any more than that would be more expensive but would also better your chances of landing the big game.

How Powerful Is The Portable Fish Finder

Power is a particularly important aspect of a good fish finder.

In very simple terms, the fish finder recovers information via the sonar emitted from the transducer. The more power your fish finder can generate, the faster its readings can be displayed.

See also  How To Buy The Best Gloves For Ice Fishing

Devices with a relatively low power output are best suited for shallow water.

Whatever your pick, it is best to go with as large a screen as you can pay for.

And make sure it can be seen clearly in direct sunlight as well as in low light.

A good benchmark for screen resolution should be 240×160 pixels.

This way, it will be easy to note what is on the screen while you are occupied with something else. After all, a portable fish finder needs to be as practical and efficient as possible to make a good fishing trip.

Colour screens are now becoming the norm with fish finders.

Their displays usually carry more detailed images can identify objects for anglers a lot easier than the black and white screens.

They are also a lot easier to read in appalling weather and in bright sunlight. That said, the more traditional black and white screens are still commercially available.

However, chances are you could do better with a color display on your new fish finder.

There are some delightful features in this area that may not be mandatory but still great to work with.

For instance, pre-installed maps of major waterways in a particular region or country, or an HD layout of the terrain underwater. Both these features would make fishing in unfamiliar areas a lot easier.

Other useful extras include a protective casing, suction mounts and easy ways of programming the device to find what you want.

After carefully considering the aforementioned criteria, you should be able to make a well-informed decision on your portable fish finder.

Based on the same critical points of inquiry detailed above, we have compiled a list of our top rated portable fish finders. 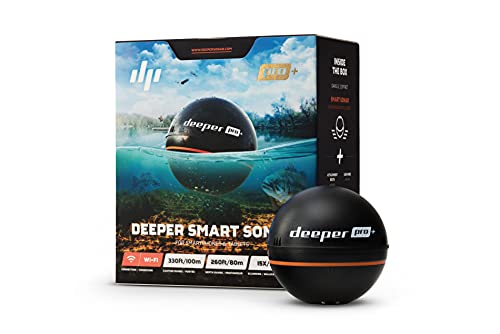 The Deeper Smart Sonar PRO+ is a portable smart fish finder having its own Wi-Fi feature that can be accessed by your android or IOS device.

It is ideal for all kinds of fishing in both freshwater and saltwater as it carries the only portable sonar on the market with GPS enabled onshore bathymetric mapping.

At 330 feet, the PRO+ also has the longest range of any commercially available sonar.

The device can detect anything as tiny as half an inch in up to 260 feet of water and is capable of delivering real time information of depth, water temperature, the location of fish species and underwater vegetation.

[mks_tabs nav=”horizontal”] [mks_tab_item title=”We like“] As you would expect, the cutting edge technology of this fish finder is extremely beneficial to customers.

While there has long been an element of mystery for anglers about just what exactly goes on below the surface, with the Sonar PRO+, that need no longer be the case.

What makes it even better is that it is well suited to so many different kinds of fishing – shore fishing, river fishing, ice fishing, kayak fishing, float tube fishing – the lot!
[/mks_tab_item] [mks_tab_item title=”We don’t like“] The main drawback is the connection to your phone is likely to sap quite a lot of the battery so your fishing trip could come to an abrupt halt.

See also  How To Spool a Spinning Reel

And if you take it to a remote enough location, you may encounter trouble with the Wi-Fi connection.
[/mks_tab_item] [mks_tab_item title=”More Info“]

The Garmin 010-01550-00 Striker 4 Bbuilt-in GPS Fish Finder is one of the most reputed and reliable portable fish finders on the market.

It features an easy to use 3.5-inch color fishfinder with a highly sensitive GPS system.

It is also capable of storing locations of hotspots, docks, and ramps where a lot of fish can be found.

The display is a compact 1.9×2.9 inches with a simply operated keypad.

It has a CHIRP transducer capable of 77/200 kHz which can be upgraded if needed to a high-performance CHIRP sonar with a GT8 or GT15 transducer.

The Garmin is one of the best-selling devices on the market.

It performs very well in both shallow and deep water and its GPS tracking is impeccable.

It is easily conceivable that it is exceptionally good value for money as it delivers more than you could expect from its price range.
[/mks_tab_item] [mks_tab_item title=”We don’t like“] Criticisms have been few but there still are some.

The lead of the transducer has proven to be rather short in some cases.

Other complaints include the GPS not being accurate at high speeds and the lack of proper instruction for first-time users.
[/mks_tab_item] [mks_tab_item title=”More Info“]

The Garmin Striker 4 with Portable Kit is available with display sizes ranging from 3.5 to 5 to 7 inches.

It has CHIRP sonar which sends a continuous sweep of frequencies to broaden the area of information it can collect.

The sonar works in tandem with a built-in flasher which also makes it perfect for ice fishing and vertical jiggling.

The waypoint map can easily find and mark locations such as docks, stumps and brush piles.

The whole device is user-friendly to operate with its keyed interface with dedicated buttons.

[mks_tabs nav=”horizontal”] [mks_tab_item title=”We Like“] The Garmin Striker is an impressive fish finder, particularly for those who have tested it out in winter.
See also  Complete Guide To Best Ice Fishing Bibs To Buy

Much of its critical acclaim has been about its simplicity, how it is all ready for the boat after coming straight out of the box. Its mechanism for locating places has not disappointed so far.
[/mks_tab_item] [mks_tab_item title=”We don’t like“] That said, there have been some issues with the transducer and flasher.

Maintaining a horizontal position on the transducer on the bottom has proven to be tricky for some.

The flasher, on the other hand, has been criticized for being unable to pick up an angler’s jigs.
[/mks_tab_item] [mks_tab_item title=”More Info“] 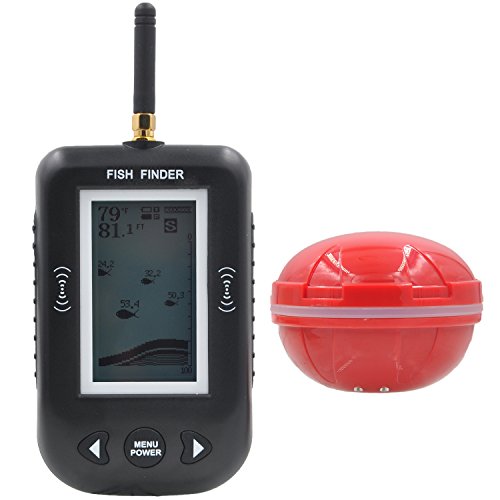 The XIKEZAN Portable Fishing Finder is compact and wireless making it perfect for setting up on your tackle box or kayak.

It also relieves anglers of those cables required for the transducer so it is lightweight and practical.

The device comes with a very resourceful LCD screen that can be read clearly in broad daylight as well as at night.

XIKEZAN can reveal information about water temperature, depth, the contour of the bottom and of course, the location of fish.

You also get advanced wireless transmitter technology with a wireless sonar sensor attached capable of receiving information from up to 260 feet away.

The device itself is user-friendly to navigate thanks to a simulation mode that assists in familiarizing yourself with the various functions.

The Signstek FF-003 Portable Fish Finder features a high tech 2.4-inch TFT LCD display showing up to 512 colours and has a white LED front light for the benefit of early morning trips.

It comes with its own sonar detector which can indicate water temperature, the contour of the bottom and identify fish – big and small – as well as their depth.

With over 100 sensitivity settings and multi-level depth range, it is highly adjustable.

Setting it up is quite an easy process.

Simply turn it on, cast out the sonar sensor and you are all set. 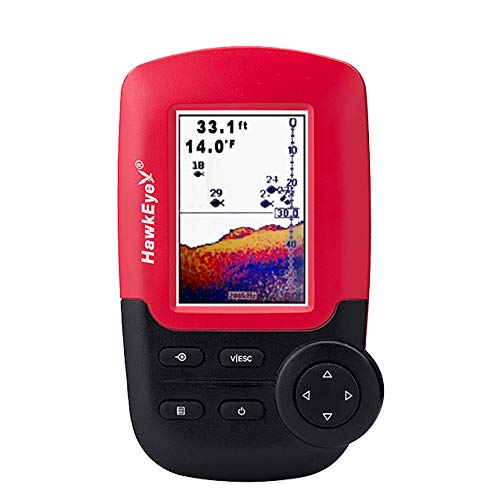 It is both portable and can be mounted on a boat.

It also comes with a cool dual-frequency FishTrax intelligent sonar kit as well as an ice-mode digital flasher portrayal and of course, a fish depth identifier.

Aside from the official standard, it is also important to consider your own methods and preferences as an angler before taking your pick.

Make sure that all the components of your portable fish finder are conducive to the type of fishing you most enjoy.

That way, your fishing experiences will just be on a whole new level of efficiency and fun. It does take quite a lot of research, but once you have made it, the rewards will certainly be worth it.

One of the most fun techniques for catching fish has to be vertical jigging. You’re not required to…
If you live in the northern part of the country where trout and salmon fishing are prevalent, you’re…
When you are out on the ocean trying to catch a big tuna or marlin, it’s important that…
If you want to ensure that you will have a fruitful fly fishing trip, you will need to…