Catching and releasing fish can be a quality day for just about any angler. Some anglers prefer to keep their limits, which is just fine, but that can mean a long tedious process of gutting and filleting your catch afterwards. After a long day of fishing, cutting and skinning a fish is probably the least favorite thing you can do. But good news for all the catch and keep anglers out there; SKINZIT has made your life preparing your fish much, much easier. They’ve introduced a new product that will make skinning and de-ribbing your catch so easy you’ll look forward to it.

Take a look at their latest offering, the SKINZIT Electric Fish Skinner! 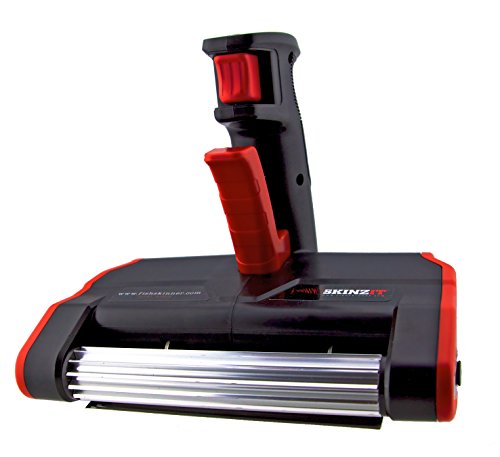 Easy to use Electric Fish Skinner

Some anglers are wizards with fillet knives and can skin a fish with little or no waste. I’m certainly not one of them!

So when I saw the SKINZIT in action I was quite impressed how it turned a difficult task into an easy one. Operation is simple- with your Fish Skinner plugged in, all you do is face the rib side up and with the fillet at an angle from the Fish Skinner, run the device over the fillet until it grabs the top of the ribs.

You will see the ribs easily separate from the rest of the fillet leaving almost all of the meat where it belongs. Flip the fillet over so the skin is up and while placing the SKINZIT on the surface, move it towards the fillet and watch as it cleanly removes the skin from your fish. Here’s a great short video explaining just how easy it is to use!

The design of the SKINZIT Electric Fish Skinner make this product even more attractive with how easy it is to clean. There is a latch on the side of the device that unlocks with a quarter turn. Once you’ve unlocked it, you can remove the spinning shaft.

Once that’s removed you can remove the grabbing blade and simply rinse under water, use a little soap, and dry it. The grabbing blade only installs one way so you’ll never have to worry about putting it in wrong. Once you’ve reattached the blade, simply slide the shaft back in and lock it with a quarter turn on the latch. The latch closes flush against the edge of the device and you’re ready to keep going!

Really simple and really fast cleaning. No need to worry about it being a production after one use!

Safety is paramount to the makers of the Electric Fish Skinner, so they’ve devised a simple yet effective safety lever to prevent almost all accidents.

The Electric Fish Skinner looks like an upside down gun, and the big “trigger” of the device is actually the safety lever. Not only does that allow power to the throttle of the device, but it also draws the guide closer to the grabbing blade.

This action will prevent the Skinner from accidentally going off if someone presses the throttle without engaging the lever. Feel confident that you can safely use the Electric Fish Skinner.

The SKINZIT Electric Fish Skinner is great for crappie, bluegill, yellow perch, and walleye. But it really can be used on just about any species, provided the size of the fish fits the blades. This would be a great device to use skinning a catfish. Or maybe you caught a nice stringer of rainbow trout and need to fillet. This device can handle it with ease without wasting that delicious meat.

If you keep your catch yet hate having to fillet it, go get the SKINZIT Electric Fish Skinner. It’s easy to use, safe, and extremely effective in skinning your catch. Spend your time catching and eating, not cutting and filleting.

The SKINZIT Electric Fish Skinner makes it easy to get your catch from cooler to table without the hassle. Try it today! Tight Lines!

The Pflueger President Spinning Reel has become my primary reel ever since I purchased it a couple years…
There is no denying that fishing has evolved quite a bit over the last few years. And, while…
We understand fluorocarbon line isn’t the best option for spinning reels. At the same time, we have found…
Even on the gloomiest of days, anglers are exposed to a considerable amount of UV rays. The best…