Copyright © 2020 WaterSports Magazine
Disclosure: Some of the links are affiliate links. This means that if you choose to make a purchase, your price remains the same and We will receive a small commission. Amazon and the Amazon logo are trademarks of Amazon.com, Inc. or its affiliates Thanks for your support!

Why You Want a Kayak Anchor Trolley

A kayak anchor trolley helps an angler quickly and easily adjust the tie-down location of the anchor on their kayak.

It also makes it much easier pulling the anchor up by allowing the tie-down to move toward the angler in a more convenient and easier place to access. This flexibility provides total control for the angler when anchoring in any type of water.

It’s worth investing in a kayak anchor trolley, and the good news is they’re much more affordable than they sound.

How does a kayak anchor trolley work? 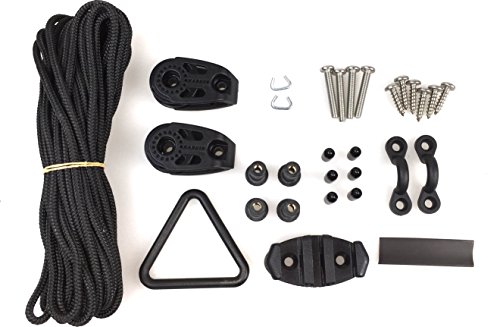 A kayak anchor trolley is a rail/pulley system made with ropes that establishes a quick tie down location anywhere on the length of a kayak. Typically kayak anglers will travel with a 3 to 3 and a half pound anchor. Because of the nature of kayaks, anglers need easy access to almost everything in the boat. A kayak anchor trolley system gives the angler an easy and convenient way of setting the anchor and adjusting its position to the optimal spot on the kayak. Here’s how it works:

Now the angler can adjust the position of the anchor line, depending on preference. Here’s a little video that shows exactly how the kayak anchor trolley system works:

Why you want a kayak anchor trolley

If you plan on fishing in any kind of current, even in small ponds and lakes, there will be a time where you won’t want to drift from your spot. Being in the middle of a hot bite is not the time to drift away to a different location. Just tying an anchor off to a specific location on the kayak won’t work because of the size of the boat and the direction your current could take you. With a kayak anchor trolley, you control the exact location of the tie off to optimize the position of your kayak. As the video showed, that angler preferred to have his anchor line attached to the back of the boat. But that happened to be for that situation. It may not be the same each time. That flexibility is critical when fishing, which is why a kayak anchor trolley is a no brainer for any angler on a kayak.

Absolutely not! At the time of this article’s writing, several kayak anchor trolleys could be found on Amazon. There are several offerings out there you just need to pick the one that’s right for you. We’re partial to YakGear’s Deluxe Kayak Anchor Trolley kit, but there are several very good options out there. You can find what you’re looking for on Amazon. Don’t forget you’ll need an anchor, too. We like KWIK TEK's A2 Complete Folding Anchor System. It’s 3 and 1/3 pound in weight, has four flukes and comes with 25 feet of durable, marine-grade rope. It also includes a float and a clip for easy on, easy off attaching to the kayak anchor trolley. Check it out and see for yourself why it’d work for you and your kayak.

The great thing about ice fishing is that you don’t have to put your favorite hobby on hold…
Somewhere along the line an angler wonders if that fishing knot their dad or granddad taught them as…
Ice fishing boots will bring essential toughness, traction, and insulation to some of the most extreme types of…
Fishing for bass is exciting and a favorite for many anglers around the country. Topwater bass fishing increases…